How much does it cost to live in Indianapolis? 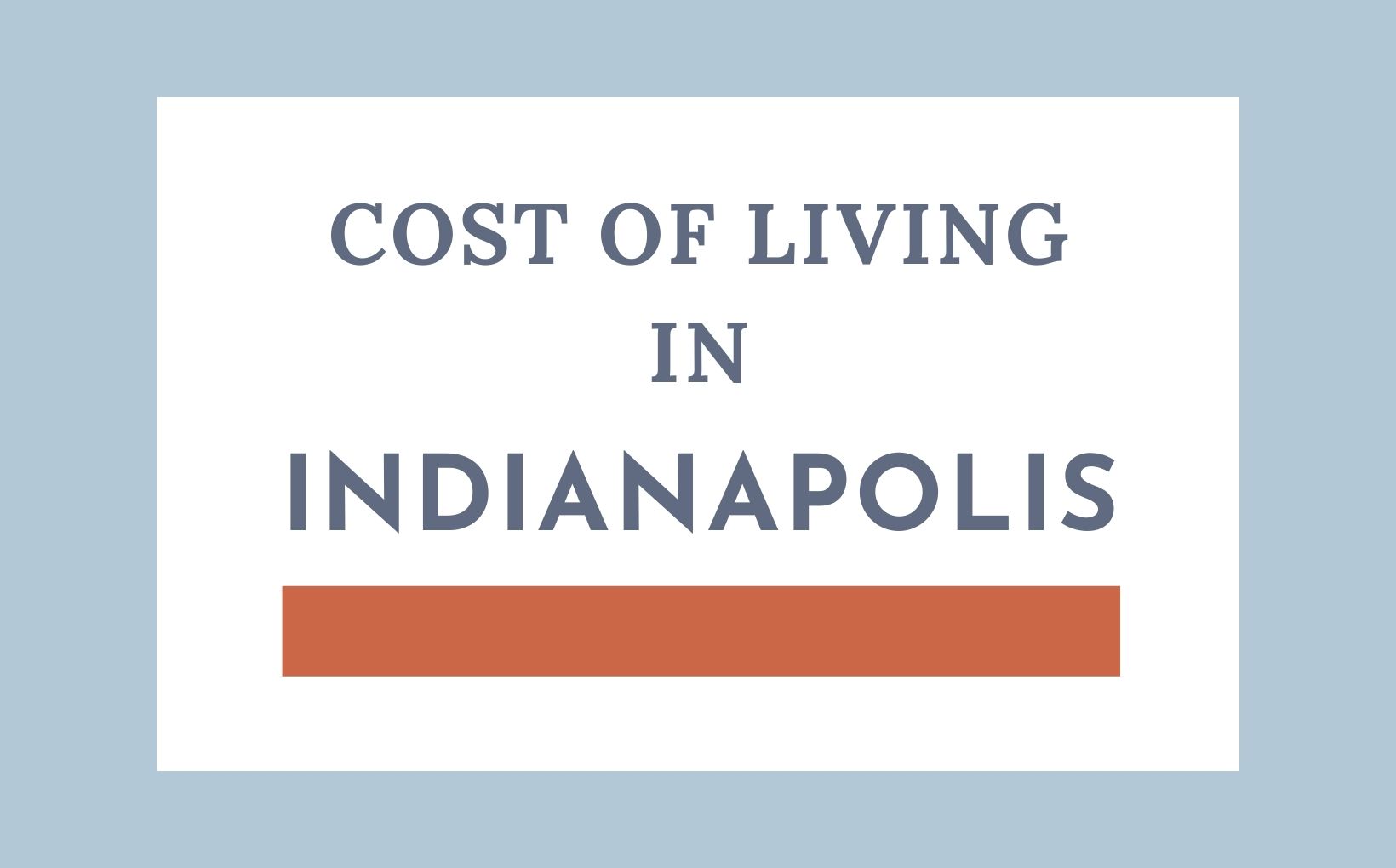 Americans all over the country are uprooting their lives on the coasts and other expensive areas for a life of “more” in the Midwest. The affordable cost of living in Indianapolis is one of the many attractive attributes to this Hoosier city. The lower expense of groceries, gas, insurance, and of course homes make Indy the perfect place to enjoy an exciting city life with a little town price tag. Let’s look at five of the main reasons the cost of living in Indianapolis is so attractive.

Evaluating the cost of living in Indianapolis to other cities

Cities like Los Angeles, New York City, Chicago, and Honolulu are known to be some of the most expensive cities to live in the United States. Not coincidentally, they’re all large cities, like Indianapolis. But Indianapolis, despite being a big metropolis, is the 48th most expensive city in the country. This means 47 other big cities cost more to live in, so those are some pretty good numbers. You still get all the amenities of city life living in Indianapolis, but at a fraction of the “big city” cost you would find in most other highly populated areas.

Many people are resistant to move to the affordable Midwest from big cities because they fear losing their big city opportunities. Versatile dining options and fun nightlife, easy travel, great hospitals, nice public spaces, and cultural immersion are just a few reasons people don’t want to leave city life behind. But these amenities come at a price. The cost of living in bigger cities is almost always higher. One of the best things about Indianapolis is that you can find all the above (and more) at a far more reasonable price. Learn More: The Good, Bad & Ugly of Living in Indianapolis

The state income tax in Indiana is 3.23%, meaning generally speaking, Hoosiers get to keep a little bit more of their income than many Americans.  Many states are in the “under 10%” category, but are still significantly higher, such as New York and Vermont. And there are of course exorbitant states, like Hawaii, or California, which is infamous for its whopping 13.3% income tax.  Now, income tax isn’t everything, there are plenty of other ancillary taxes and fees you’ll have to pay here and there, but can’t we all take a break where we can get it?

We all know there are a handful of states that don’t charge income taxes at all. Keeping every penny of your hard earned money? Well that sounds great, doesn’t it? But there’s always a catch. These states compensate with their other taxes, such as sales and property taxes. In some states, like Texas; the property taxes are so high it can blow those would have been income taxes right out of the water. So if you’re thinking of moving to Indianapolis, a 3.23% sales tax is pretty low, and you’re probably still coming out on top when it comes to the money you’re forced to hand over to Uncle Sam. The property taxes in Indianapolis are some of the most affordable in the country. For many people living in big cities, being able to afford a four bedroom home with a nice yard and a garage isn’t so much about how much the home would cost to buy, but how much it would cost to continually pay the property taxes.  Because you’ll be paying property taxes every year, it’s really important to calculate them before you buy and budget that into your decision. In states like California, this is often the make or break factor in home ownership.

The property taxes in Indianapolis benefit from the low state property taxes, because much of Indiana is rural.  The statewide average in Indiana is .81%, and that’s a bit lower than the national average. Just next door in Illinois, the property taxes are the second highest in the country. This is primarily due to the inflated real estate in Chicago; but the entire state suffers because of it, and most of that state is farmland. The day to day expenses for a family living in Indianapolis are generally very affordable. Healthcare in Indy is pretty average when it comes to out of pocket expenses, but it also has some of the best hospitals in the Midwest, so you’re actually paying less than you would elsewhere for excellent healthcare. Hospitals such as Indianapolis Methodist, and the Indiana Orthopedic Hospital are renowned all over the country for their specialists and cutting edge procedures.

Groceries and other food expenses are pretty low in Indianapolis, as well. The Midwest generally has very affordable groceries and dining out costs (after all, most of it is grown there!) but you can still find a plethora of options, especially in Indy. If you have dietary restrictions, live a vegan lifestyle, or just want only the best organic meats and vegetables, it’s much easier to find the kind of food that you’re looking for in Indianapolis, as opposed to the rest of the state.

The cost of utilities in the Indy area is pretty average, and of course depends on your usage. The long winters can make the gas bill go up, but if you make efficient choices in your home, such as covering windows with thick, cooling and warming curtains to keep the cold out, you can keep the bills pretty low. The size of your home will also greatly affect your utility bills, not just in Indianapolis, but anywhere you live. If the affordability in Indianapolis has encouraged you to buy the huge home you couldn’t afford in Chicago, keep in mind the bills are going to be higher even though it’s cheap to buy initially. While it might not be by a landslide, transportation is marginally cheaper in the Midwest. Unfortunately, if your mode of transportation is public transportation, like busses and trains, it’s not phenomenal in Indianapolis. There are busses, but Indy is so spread out that it can be hard to find a line that goes where you want to go, or gets you all the way to your destination.

The lack of public transit is perhaps one of the biggest downfalls of Indianapolis as a large city, because many city dwellers don’t have a car. The main reason for this lack of busses and trains is that most of these public transportation means are funded by city taxes, and in Indianapolis, the taxes are pretty low. Though you are benefiting from lower taxes if you have your own vehicle, you can see how it affects the public transportation.

With that out of the way, if you have a car in Indy, it’s more affordable to use it than it is in many other cities. Gas prices in Indianapolis are pretty reasonable, and services to your vehicle are on the sensible end as well. Learn More: 5 things to know about moving to Indianapolis

We touched on all of the ways living in Indianapolis can save on cost of living, but the greatest part about the cost of living in Indy is the cheap housing! Not cheap as in poorly made, Indiana has some of the best craftsmanship you can find. No, we mean affordable. The median home price in Indianapolis is $159,843!  This number can be a little bit deceiving, because this is considering Indianapolis as a whole. Many of the most popular suburbs of Indy (and its famous for its fabulous suburbs) are on the more expensive end. Areas like Carmel, Zionsville, and Avon will have higher housing costs. Avon, for instance; has a $237,603 median home price.

The average incomes are higher in these pricier suburbs as well, so the housing costs directly reflect the incomes. The cost of housing in Fishers is even higher than in Avon, and if we go to Carmel, it’s all the way up at $355,811. Even though that’s a high median home price, keep in mind this is still incredibly affordable if you’re looking at the big picture. You couldn’t begin to buy a one bedroom condo in Los Angeles for under $350K.

Even in other big cities touted for their affordability, like Phoenix, $350K won’t buy nearly what it will in Indianapolis. The amount of “home” you get for your dollar in Indianapolis is pretty astounding. You can get a 4,000 square foot home in the Indy area for often less than $300,000. This is a huge dwelling, and will probably have a nice garage, a yard, and plenty of room for a big family.

If the affordability of living in Indianapolis has you interested in calling this place home, then we can help! We help families move out here every month, and they’re finding their dream home in a much more affordable way. Get in touch with us to get started!