Pros & Cons of Living in Indianapolis 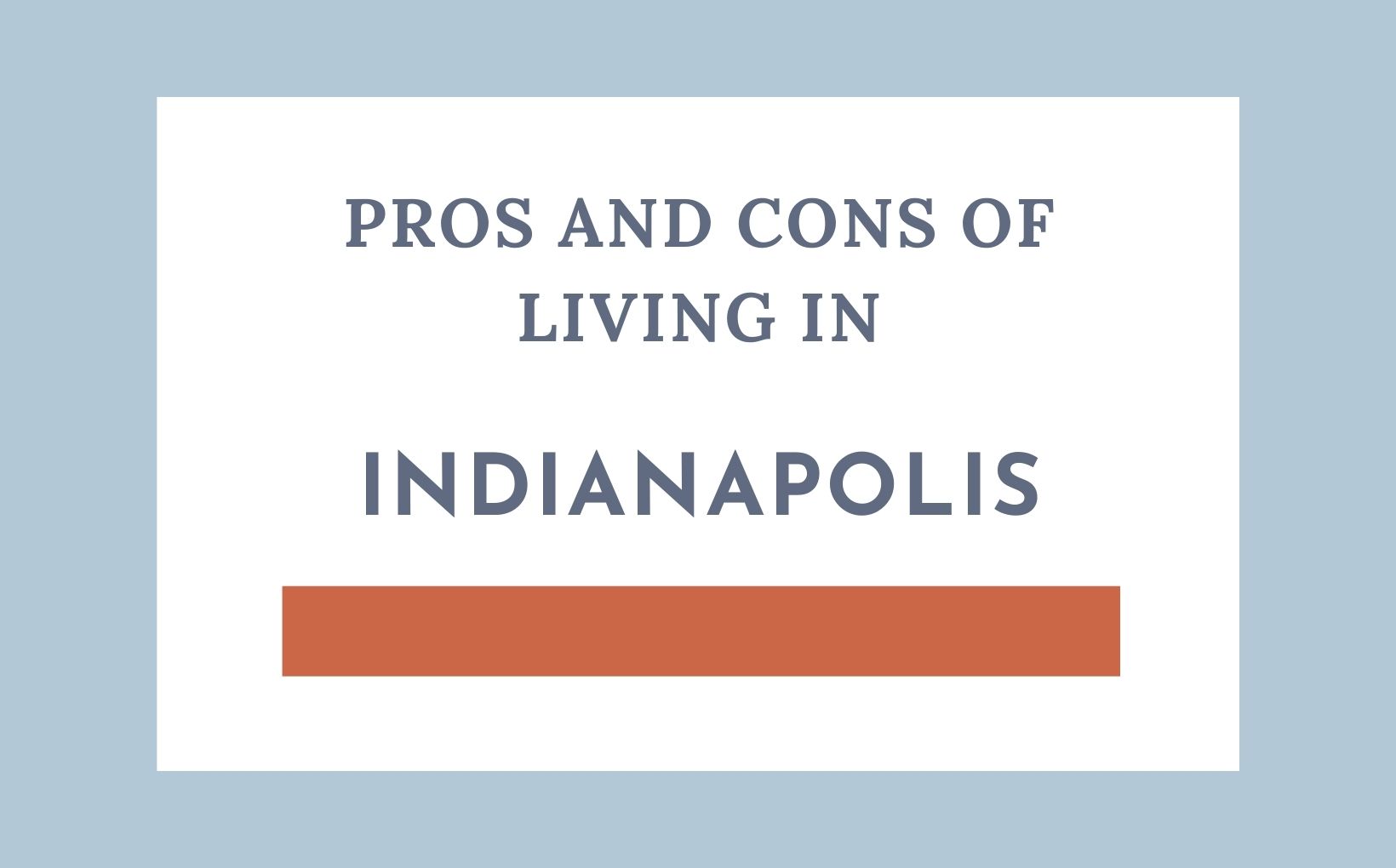 Indiana’s beautiful capitol is replete with wonderful schools, art, museums, entertainment options, and more, nestled in the middle of the Crossroads of America. Whether you are looking for big city life with small town charm, or an exceptionally affordable cost of living, let’s check out some of the pros and cons of living in Indianapolis, Indiana.

Cons of Living in Indianapolis

Con #1 – The Weather in Indianapolis

No if’s, and’s, or but’s; the weather in Indianapolis can be pretty dismal. The month of May heralds in the beautiful Indiana summer with the Indianapolis 500 festivities. However, the months leading up to this major event are long and cold. Unfortunately, there isn’t much to do outside when those winters hit. Unlike the far north, or the west, where people embrace winters and get out and about ice fishing, snowshoeing, and skiing, in Indianapolis there aren’t many options for outdoor fun.

If you’re really looking to find some winter fun in Indiana, there are a couple ski areas further south, such as Perfect North Slopes, and Paoli Peaks, where skiers can get out on the snow and get some turns in. Though it might seem like child’s play to the avid skier, if you’re a beginner, or just desperate for a few runs to earn those après ski drinks, well…it’s something!

When the icy weather hits, the roads can get nasty, and having an all wheel drive car can really give you an advantage. Indianapolis is somewhat known for the poor maintenance of its public roads, and no doubt the long winters and constant freezing and thawing of the nights and days are to blame. By the end of winter, the potholes can be out of control, and debris from the crumbling remains of the highway can get launched up into your wheels and undercarriage (but hopefully not your paint job!)

The winter weather isn’t the only natural disaster that can ail Indianapolis residents. The Midwest, especially the plains states, get a significant number of tornadoes. Luckily, though they are devastating and unavoidable, the likelihood of you actually losing your home to one is pretty slim. Indiana only gets about 22 tornados a year during the peak months, and most of those won’t be making a bee-line for your front door. If this number still seems high, consider that other states have much higher tornado rates, such as Kansas, averaging nearly 100 a year. When you consider the wildfires and earthquakes of the west, or hurricanes and flooding on the coast, a few tornadoes don’t seem so ominous. Learn More: Five things to know before moving to Indianapolis

Most Indianapolis natives will tell you the traffic is pretty terrible. While traffic congestion is subjective, for the sake of our list, let’s assume this is true. Certain times of the day are worse than others if you’re trying to get around the city, such as rush hour, or holiday weekends.  Even when the traffic isn’t at its most dense, 2.5 million people in Indy are trying to get from Point A to Point B.

Along with the high density of commuters, Indianapolis spans an area of about thirty miles, meaning if you have to get from one end of town to the other, this could easily be a forty five minute or hour long drive. Add even just a little bit of traffic to that lengthy distance, and you’ve got a long drive ahead of you.

If you find yourself moving to Indianapolis from an even bigger city, such as New York, Chicago, or Los Angeles, the concept of bad traffic in Indy might seem trivial to you. Indeed, it’s not as bad as it is in some other cities, but don’t expect it to be clear roads all day every day just because you’ve moved to the Midwest. Does Indianapolis have public transportation? Yes. Is it excellent? No. There are public busses, but not enough to service such a large area. You probably won’t live right by the bus stop, meaning you would have to get a taxi or rideshare just to get that far. Many big cities are a great place to live the “car free” life, but Indianapolis isn’t one of them. You will most likely have to have your own car as Indianapolis’s public transportation system isn’t too advanced.

Learn More: Pros & Cons of living in Indianapolis versus the Indy Suburbs

Pros of Living in Indianapolis

Residents of Indianapolis enjoy all the amenities of more expensive cities, such as entertainment, diverse dining options, culture, sports, and easy airport access, at a fraction of the usual big city cost of living. Housing especially, is extremely affordable in Indianapolis, whether you choose to be a suburbanite or city dweller.

Those moving to Indy from other large cities find it to be incredibly affordable, realizing they can have so much more for the same prices (or lower) that they were making work in their previous cities. Pro #2 – Indianapolis has the best suburbs in the U.S.

For those wishing to be suburbanites, the Indianapolis area is the cream of the crop (no pun intended, despite the mass production of crops in Indiana!) In 2019, Carmel, Indiana, was voted by niche.com as the number one suburb in America.

Great places to live are of course subjective, but the contributing factors to these lists are usually: low crime rates, excellent schools, economic health of the area, and affordable cost of living and home prices. If you want to live in an area you consider to be a great place to raise a family, but still want the amenities of big city life; like having a big airport in town, and a huge selection of dining and entertainment options, Indy is the perfect blend of both. Midwestern hospitality is something hard to duplicate. The courteous nature and generosity of the small towns that dot the center of the United States is well known and difficult to find elsewhere. But you don’t have to live in Mayberry to find this.

Indianapolis has been referred to as a “little big town” due to its small town feel despite its large population.  All the sports, museums, and night life of a big city can be found in Indianapolis, all while offering a friendly ‘small town’ vibe. The downtown area is extremely walkable, adding to the big city feel; but perhaps employs just a slightly slower pace. Unlike Chicago or New York, there is a palpable “relaxed” nature to Indianapolis.

Life might be busy, but the stress is lower, the people are kinder, and though there is plenty to do, it’s also easy enough to take a step back and just breathe. Though it’s generally debated all over the country, Daylight Savings Time operates to do just as its name entails, save your daylight hours! Indianapolis observes Daylight Savings Time, meaning in the late fall, we turn the clocks back an hour, and in the spring, we turn them forward. This saves you from evenings when it’s getting dark at 4:00 p.m. Originally designed to give farmers more daylight hours to work in the fields, everyone benefits from a schedule that isn’t held steadfast as the earth gets further from the sun.  Some people, however; think Daylight Savings Time causes undue stress, and throws off your body clock for the days or even weeks following the switch.

It might not be an issue in Indianapolis, if it weren’t for the fact that Indiana wasn’t always a Daylight Savings State. Years ago, former Indiana Governor Mitch Daniels gave a hard push for the Hoosier State to observe Daylight Savings Time like the majority of the country had already done, and in 2006 it was adopted and put into practice.  For those who remember the state pre-Daylight Savings, it can be frustrating to adapt, even though it’s been years. It’s seemingly become less of an issue, because the entire country (with the exception of Arizona) now observes Daylight Savings Time.

Indianapolis and the suburbs are in two different times zones

Also slightly confusing in the state of Indiana is the fact that Indianapolis; the state capital, is in a different time zone than much of the state. A horseshoe-like piece of the state is on Eastern Time, while the northern and southern ends of the state are on Central Time. This can be extremely confusing when it comes to catching news releases, planning trips to other parts of the state, or even remembering if and when businesses will be open just a few cities away. Though not unbearable, it definitely adds confusion for those living in Indiana.

Now that you know the pros and cons of living in Indianapolis, you’re even more prepared to move to the area. If you’re looking to move to Indianapolis or interested in living in a different Indy suburb email or call us to get started! We can help you find the perfect place for you and your family.