Pros & Cons of Living in Indianapolis vs the Indy Suburbs 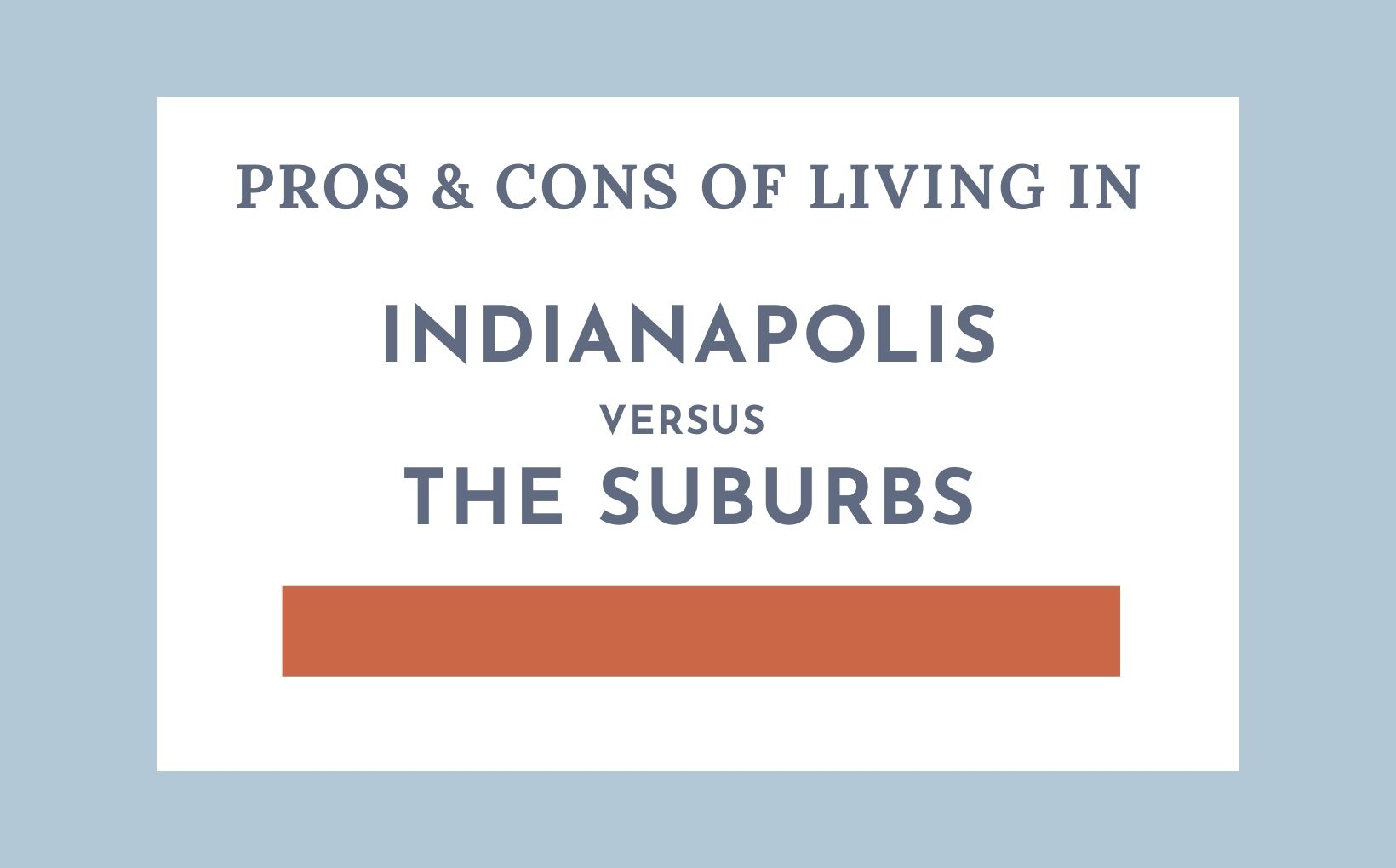 The Indianapolis suburbs offer some of the best amenities and highly rated schools in the Midwest. For some; however, suburb life pales in comparison to the hustle and bustle of the big city. Many would trade the picket fence and two car garage for a plethora of dining options, or being within walking distance to sporting events. Some people find an expansive yard to be far more enticing than being able to walk to their favorite Thai joint. Whatever your view of the perfect city or suburb life, let’s look at some of the pros and cons of living in Indianapolis vs. the Indianapolis suburbs.

Con #1 – Indianapolis is very spread out

Like Los Angeles or Phoenix, Indianapolis is a big city that is surprisingly spread out. It’s close to twenty miles from one end of the city to the other. Which means you won’t easily get around without a car. If you are living in the suburbs and commute into the city for work, chances are you’ll be on the road during the same hours everyone else is doing the exact same trek, and you’ll be sitting in a lot of traffic with them, too.

The traffic in Indianapolis, especially in the downtown area, is getting increasingly congested. If you work in the city but live in the suburbs, you’re just going to have to commit to this transportation reality.

If you live in the suburbs and work in the suburbs, you’ll have certainly avoided the traffic nightmare. It doesn’t come without a trade, however. If you live on the outskirts of the city and rarely travel into it, you’ll be living with a palpable disconnect with what is going on in the city. Getting into town will take a concerted effort.

If you want to go to a nice dinner, or bar hop on a Saturday night with friends, it will take some planning to decide if you will drive or take a rideshare. If you are heading to sporting events, you’ll have to factor in paying to park your car. You’ll feel a general inconvenience to being involved in city life if it’s always an effort just to get there. Con #2 – Lack of cultural diversity in the suburbs

It’s a well known fact that big cities attract people from all walks of life from all over the world. These areas tend to be more socially and ethically liberal as well, being open minded to many cultures and belief systems. Children growing up in cities experience diversity at a younger age and people in the workforce will be exposed daily to people different from themselves.

Indianapolis is particularly diverse, especially for being in the center of the country (as opposed to coastal towns which are far easier to immigrate to.) Indy has seven cultural districts, and each of them has its own flavor and historic culture.

For those living in the suburbs, the exposure to diversity and culture is significantly reduced. This isn’t to say you won’t have neighbors of a different ethnicity, or have a coworker who celebrates Hanukkah instead of Christmas, but they will most likely be outliers.

You won’t find as many ethnic restaurants in the suburbs either. Yes, you might find Panda Express and Fazolis, but for many these types of chain restaurants can’t compare to a family owned Chinese restaurant, or a small and cozy Italian bistro. Learn More: Five things to know about living in Indianapolis

We mentioned previously how spread out Indianapolis is, and this is well exemplified for anyone trying to take the public busses to and from their destinations. Indy is not well known for having excellent public transit. Unlike New York City or Chicago; who have perfected the subway system, Indy just falls short for those without a car of their own.

There’s always the option of rideshare transportation, but if you’re living in the suburbs, that’s probably a bit of a drive to regularly ride with a stranger. Indianapolis of course has public busses but most of them don’t have routes that go too far into the suburbs.

If you want to ride the bus, you still might have to Uber to the bus stop from home. Basically, if you take anything away from this con, it should be that you really can’t get around the Indy suburbs without a car of your own.

Learn More: 3 Reasons why Fishers, Indiana is such a popular suburb

Pro #1 – Cost of living is typically cheaper in the suburbs

Typically speaking, the cost of living in the suburbs of Indianapolis is less than it would be if you were living in the city. Of course, lifestyle comes into play, and budgets can range depending on what that means to you. But when it comes to housing, groceries, dining out and other daily expenses, you’ll be saving money living in the suburbs. To some people, this money saved, plus the extra space you can get for your dollar in the suburbs, is all they need to make the move.

The money you spend not only goes further in the suburbs, but it can purchase more home. For the price you would pay for a small single bedroom condo in the city, without a yard, and just one parking space (if any) you could be getting a home in the suburbs, with a driveway, garage, and multiple bedrooms and bathrooms.

This is the case in any big city vs. suburb comparison, but it’s specifically noticeable in Indianapolis. The suburbs of Indianapolis are some of the most beautiful and affordable in all of the country, which is apparent by the vast growth of each of these areas over the last fifteen to twenty years. If you’re thinking about moving to the suburbs, now is probably the time to do it because nothing can stay cheap forever! We all consider the safety of ourselves and our families paramount, so it’s no surprise that the security of the Indy suburbs is a huge pro on our list. Not only are the violent crimes significantly lower in the suburbs, but even petty crimes; such as vandalism or your car getting broken into, happen less here. Perhaps this is in part due to less communal space people must share. For instance, if you have to park your car on the street, it’s definitely more likely to get broken into. If you have a garage to park it in, who is going to be coming into your garage to bust out a window and steal your stereo? Not saying it couldn’t happen….but our robber would have to be a LOT more courageous. Or stupid.

With safer streets and lower crime rates come neighborhoods people feel comfortable in. Many move to the suburbs to know they can walk the dog in the evening after dark or go for an early morning jog. Especially for women wanting to get out and about on their own, that security is huge. Knowing you can leave a key under a flower pot for your neighbor to feed the cats while you’re gone, or that if you leave the garage door open your bike won’t ride itself away, are all feelings of security that for many people make living in the suburbs very desirable.

Pro #3 – Each Indy suburb has a built out downtown area

We mentioned previously that without living near the downtown “heartbeat” of the city, you’ll feel disconnected. While this is true to an extent, the suburbs in Indianapolis are doing an excellent job of recreating that feeling of community right at home.

Suburbs such as Carmel and Fishers have wonderful downtown areas of their own, with coffee shops, bars, and restaurants. Local, small businesses thrive in this environment, and the residents love supporting them. Music and food festivals go on throughout the year to entice residents to come out and mingle.

With great focus on community, walkability, and cultivating a sense of belonging within these suburbs, city planners have done an exceptional job of creating “little big towns” all over the suburbs, and it appears to continue to get better all the time.  Indianapolis is certainly booming when it comes to the foodie scene, but some of these suburbs are catching up close on its tail. Itt will be exciting to see what these local downtown areas look like in just a few short years. Can’t decide between living in the city of Indianapolis or the Indy suburbs?

Whether you are a city dweller who thrives in the beehive or a suburbanite plotting out your garden before Valentine’s Day even comes, there’s so much to love about Indianapolis and the surrounding suburbs. If you’re thinking of moving to the Indy area, suburb or city alike, reach out today and let us help make that a reality! !