Pros & Cons of Living in Lawrence IN 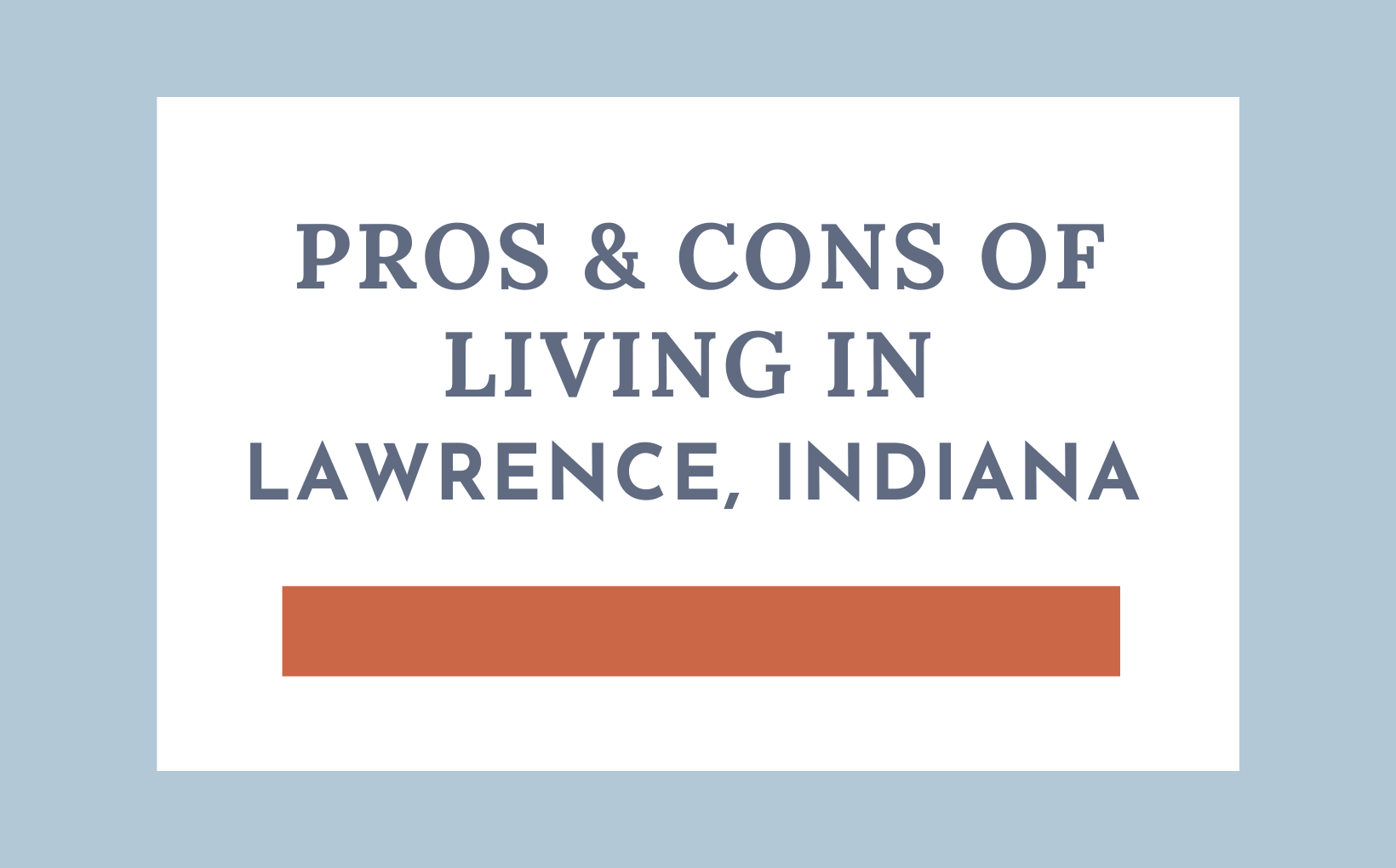 Pros of Living in Lawrence, Indiana

Of all of the suburbs of Indianapolis, Lawrence has access to some of the best outdoor recreation. Fort Harrison State Park and Geist Reservoir are some of the best places in the Indy Metro Area to get out and enjoy the great outdoors. For a small daily fee, visitors can enjoy the trails, picnic areas, and golf course within Fort Harrison State Park. The only thing you can’t do here is camp overnight. Once in the park, you might forget you are even in central Indiana. The rolling hills and dense woods feel more akin to the foothills of the Appalachians, or Southern Indiana, known for its hilly topography.

If you enjoy life on the lake, there is no better place for that in central Indiana than Geist Reservoir. This massive water feature offers both visitors and residents access to boating, fishing, and just all-around water fun. The only drawback of Geist Reservoir is its lack of public access to the water. There are no public docks or beaches within the reservoir and boat ramps are few and far between. This limits ways to enjoy the water, meaning you almost have to have your own boat. But if you are a boat owner, not only is Geist a great place to take it for a spin, it’s a great place to call home. The waterfront homes here are stunning, and even if actually living on the banks isn’t in your budget, the entire surrounding area is very residential.

Learn More: What it’s like Living in Geist, IN

Lawrence is one of the most affordable suburbs in Indianapolis. The median home price is $185,000, which falls just under the at least $200,000 or higher median in nearly every other suburb, especially on the north side. This doesn’t necessarily mean it will be easy to find a home for this price because competition is steep, especially in the seller’s market. But unlike many other suburbs around Indy, there are more choices in Lawrence. Options are far more plentiful, and even if you can’t find something exactly in your desired price range, you will have more to pick from.

The median home price for all of Indianapolis is just around $170,000. This number can be a bit deceiving, however, because this takes into consideration the very run down and older parts of town. Indianapolis is a well established and historic town. Though beautiful and prosperous, there are still plenty of parts of town that have not kept up with the expansion and have fallen into disrepair. This means you aren’t likely to find the “average” home for $170K, so don’t set your expectations unrealistically high, unless you are desirous of calling a dilapidated apartment home.

3. Lawrence is very close to Indianapolis

You would think living in any of the suburbs of Indy means you are close to the city, but this certainly isn’t the case. Especially on the north side of town, the suburbs are growing farther and farther from the city, some even being nearly an hour from Indy proper. If you know you want to live in the suburbs, but don’t was to live “two towns over” Lawrence is a perfect location. The amenities in Lawrence are new and plentiful, so you shouldn’t need to leave town too often, but if you do want to go into Indy, it’s a very easy and quick drive.

*Note about location – If you are looking at a map and you are not already familiar with the Indy Metro Area, be sure to check if you are looking in Lawrence, or Lawrence Township, which are in fact two different places. They are directly next to each other, and there is little to no difference in the feeling of the town or homes, but Lawrence is its own town, and Lawrence Township is part of Indianapolis, meaning it has an Indy address.

Cons of Living in Lawrence, Indiana

Though easy access to Indianapolis was listed as a pro to living in Lawrence, it isn’t straight across the board. The farther to the northeast you live in Lawrence, the harder it is going to be to get into the city. Though from a mileage standpoint Lawrence is very close to Indianapolis, it doesn’t always mean it’s easy to get to. The good news is, US 36, the main artery that takes you in and out of Lawrence, runs right into downtown Indianapolis and Mass Ave.

If you head southeast on US 36 you will certainly end up where you want to be, but it won’t be without plenty of traffic and stop lights. Because 36 is the only main thoroughfare through the area, it’s also extremely congested during rush hour or holiday weekends. Getting to I 465, the bypass around the city, is also somewhat inaccessible. If you live closer to Geist Reservoir or the more quiet and upscale parts of town, you can expect more difficulty getting onto Downtown Indy for events, shopping, and entertainment.

Learn More: 5 Most Underrated Places to live around Indianapolis

2. Some parts of Lawrence are less savory than others

Overall, it’s a fairly well-known fact that Indianapolis doesn’t have the best crime rating. This is common in big cities, but even for a large metropolis, Indianapolis doesn’t do well when it comes to the numbers. This isn’t always violent crime, vandalism and theft are far more common, but being the victim of any kind of crime is never on someone’s bucket list. The central parts of Indianapolis proper are the most saturated with crime, and due to the proximity of Lawrence to Indy itself, this means crime is higher in Lawrence than other suburbs.

The closer in Lawrence you get to Indianapolis, the worse the crime is. If you live near Geist Reservoir, or in any of the outskirt neighborhoods on the far northeast side, the crime rate goes down. But then you are back to the inaccessibility of the far-out parts of town. If you want to be closer to the city, you’ll have to be closer to all aspect of city life, higher crime rate included. As with any city, paying attention and protecting yourself goes a long way if you live in an area that experiences more crime. Locking doors, keeping high-value possessions out of sight, and avoiding less safe areas after dark can go a long way when it comes to your safety and that of your property.

3. Lawrence lacks its own downtown area or cultural hub

For those who want to live in Lawrence because it’s close to the action of Indianapolis, this little drawback may be minimal. The lack of a central gathering space is common in the suburbs of Indy. As suburban sprawl has seeped outward from Indianapolis, many of these small towns have built plenty of housing and basic amenities but lack areas for the residents to gather and engage. Some suburbs have done a good job of cultivating their own downtown area, such as The Arts and Design District in Carmel, IN, and The Nickel Plate District in Fishers, IN.

There are plans in the works to create a better cultural hub in Lawrence, however, so if you are willing to wait it out a little bit, there may be better options in the near future. Fort Harrison has become somewhat of a gathering spot, and multi-use infrastructure is being built here to provide a venue for events, festivals, markets, etc. Though once a military headquarters, Fort Harrison is now primarily public offices and space. This makes it the perfect place to utilize the current infrastructure and build on from there.

Every neighborhood has its own variation of pros and cons, but we feel the pros to living in Lawrence far outweigh the cons. With so much to do, affordable housing, easy access to the city, and a quiet and family-friendly atmosphere, Lawrence is truly a suburb that has it all. More than anything, this particular suburb offers the chance for residents to pick the lifestyle that is most attractive to them depending on what part of town they chose to live in. Whether you want the city-adjacent life, or the peaceful lake life, you can have either in Lawrence, IN.

Thinking of Moving to Lawrence, Indiana?

Does Lawrence sound like the perfect suburb to call home? If you are ready to move to Indianapolis, reach out to me today at Compton Realty, and together we can find your next home in the Indy Metro Area!