Five things to know BEFORE moving to Indianapolis 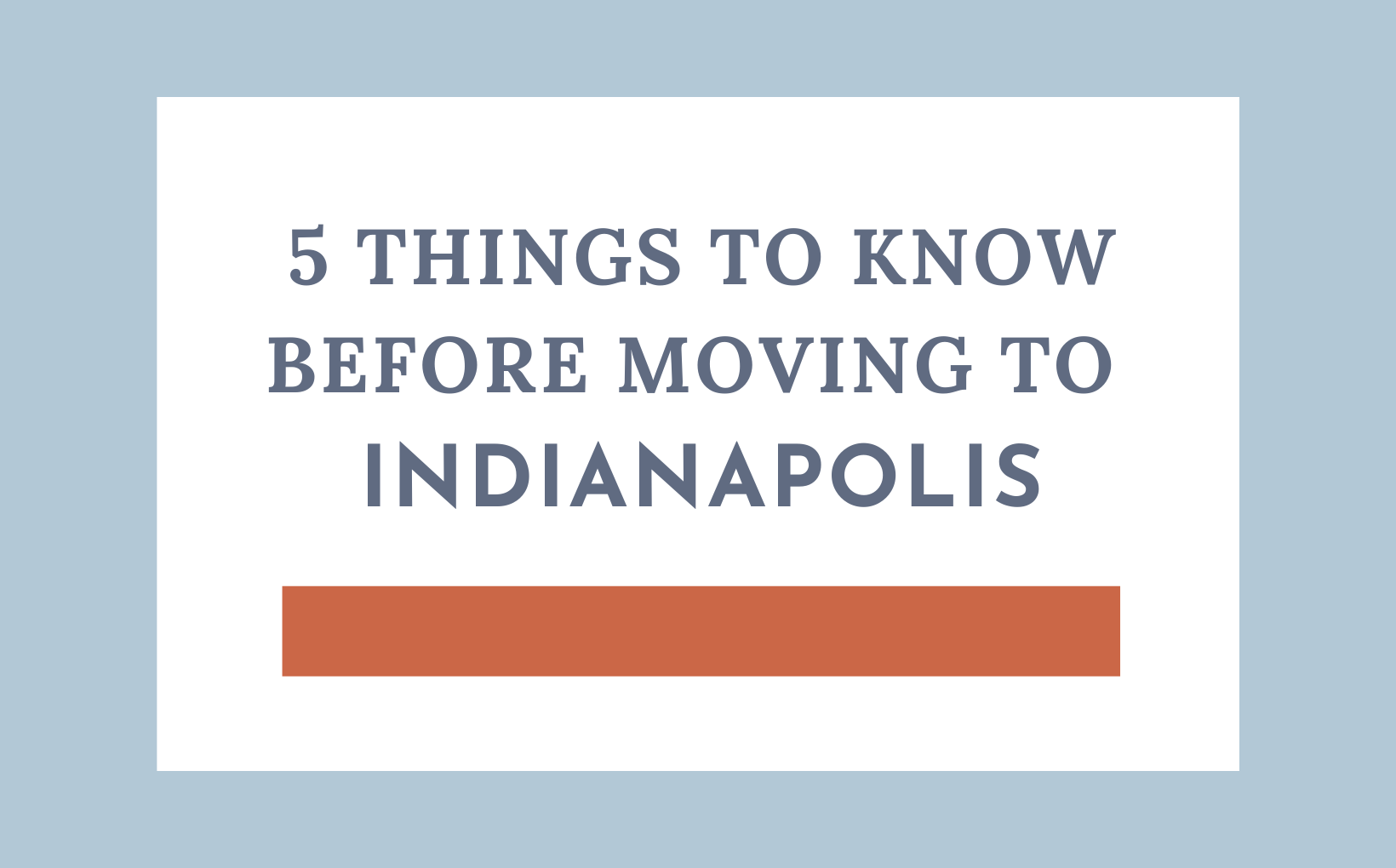 If you’re thinking of moving to Indianapolis, you’ve likely already heard about its wonderful suburbs, affordable cost of living, and midwestern charm. But there are a few things you need to know about Indiana’s capital city, they might be deal-breakers for you. Check out these five facts about living in Indianapolis before you decide to make your move to The Hoosier State.

Five things to know when Moving to Indianapolis

Indiana winters are as unpredictable as they are long, and they’re pretty long. Winter can come as early as November and stay as late as April. Even worse than its lengthy stay is the fact that the weather fluctuates like Liz Taylor’s husbands. It’s not uncommon to dress for freezing temperatures only to realize that by noon it’s sunny and 65 degrees outside. Did you wear a raincoat thinking rain was on the way? Let’s hope that raincoat is warm, because by the time that precipitation arrives it might actually be snow.

The plus side of the weather in Indianapolis is that you will experience all four seasons. This makes holidays like Halloween, Thanksgiving, and Christmas all more festive. Even with the snow and sleet throughout the colder months, Indianapolis snow is much milder than the snow they get just a few hours north.  You won’t likely have to dig your car out of a snowbank, so it’s generally pretty manageable. Learn More: The Most Underrated Places to live outside of Indianapolis

Let’s be clear, you can absolutely get just about anything you want or need living in Indianapolis. After all, it’s the largest city in the state. People come from other cities to Indy just to shop there. But if you are moving to Indianapolis from a city like Los Angeles, Chicago, or New York City, you’ll instantly notice the shopping options are lacking to say the least.

Shopping centers and malls can be found throughout the entire Indy Metro Area, but they are not particularly high-end. Keystone Mall offers the most upscale merchandise, but it’s hardly Rodeo Drive. The shopping amenities of Indianapolis represent the needs of its residents, and a cocktail dress for your next gala doesn’t tend to be one of them.

3. Sports are a big part of the culture of Indianapolis:

You don’t have to love sports to live in Indianapolis, but you will have to tolerate hearing about them. Indianapolis is undoubtedly a sports town, and it shows. One might instantly think of The Indianapolis 500 when they think of sporting events in Indy, and that’s certainly an event that isn’t taken lightly. But there’s so much more to the sports offerings in Indianapolis.  There is some truth to Indiana basketball being superior to many other states…what else do you have to do but toss a ball around indoors when the winter lasts for five months?

There is almost always a game of some kind going on somewhere at nearly any time of the year. Bars that aren’t necessarily sports bars will have games on the tv. Downtown Indy is literally built around the sports offerings of Indianapolis. And during the entire month of May, be prepared for the grand pomp and circumstance that surrounds the Indy 500 and its festivities. You don’t have to love it, but you will have to live among it. Learn More: Is it safe to live in Indianapolis?

4. Indianapolis is not a walkable town:

One city-life standard that seems to be universal is walkability. Well, sorry Indianapolis, you’re sitting this one out. Indianapolis is large, sprawling, and terribly lacking when it comes to walkability. Not only is it a difficult town to get around on foot, but the bus system leaves much to be desired. There are buses, and they will move you about town, but they won’t likely get you entirely from Point A to Point B. If you are going to live in Indianapolis, you almost have to have a car.

Not only will you need a car, you’ll probably need more than one if you have a family. Most suburban Indianapolis families are at least two-car households. Luckily, the metro area is well situated for the number of vehicles traveling its streets, so there is ample parking almost everywhere. While parking might be the stuff of nightmares in cities like Chicago or Los Angeles, Indianapolis has done an excellent job providing lodging for your four-wheeled friends, even in the most densely populated parts of town. Love it or hate it, the clocks jump an hour twice a year in Indianapolis. This shouldn’t come as a shock, after all every state recognizes Daylight Savings Time with the exception of Hawaii and Arizona. But Indy’s location puts it at a disadvantage for this otherwise advantageous practice. Indianapolis is located on the far western end of the Eastern Time Zone. Most of the state of Indiana, in fact, is on Central Time. (Yes, it’s ridiculous that the state capital is not in the same time zone as the majority of its residents. Yes, Indiana residents hate it. Yes, it should change. No, it doesn’t seem like it’s going to.)

Because Indy is almost in a different time zone, the daylight hours during the middle of the winter and summer are limited and excessive, unfortunately in the wrong direction. During the longest days, it might stay light outside until 9:00 p.m. During the winter months, darkness is creeping in seemingly just as you have finished lunch. Not great for one’s Circadian Rhythm or getting excited kids to bed when it’s still bright outside.  To the north or south of Indianapolis, in Northern Indiana and Southern Indiana, the state is situated well enough into the Central Time Zone that this misalignment isn’t so palpable. But for those who call Indy home, unless the state drops Daylight Savings altogether, this will be the reality.

Want to buy a home in Indianapolis?

Are you thinking of moving to the Indianapolis Metro Area? If so, reach out to me at Compton Realty. I would love to help you find your next home in Indianapolis.